Food for thought here:
One questioner asked an excellent question regarding being good white allies: How best do we consume indigenous stories while preserving their integrity? 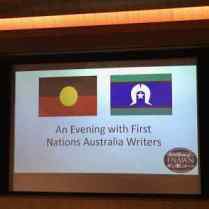 My first day of the Canberra Writers Festival ended with a bang – two hours with several of Australia’s top indigenous writers, organised by FNAWN (First Nations Australia Writers Network). It was a not-to-be-missed event, and was divided into two parts:

I liked this structure: the poets provided a emotive introduction to panel’s intellectually-focused discussion (not that the poems weren’t underpinned by intellect, mind you.)

“Because of her I can”

I’m just going to list the poets and their poems, as well as I can, as I did for the Canberra poets session earlier in the day. You may like to research them, though I’ve provided some links …

‘Bjorn whooped as the newly risen northerly smacked into the Sea Eagle’s sail.’

King Beorhtwulf of Mercia was sold into slavery twenty years ago. Can he possibly still be alive? His son Eadwulf hopes so. Eadwulf joins Bjorn and his crew onboard the Sea Eagle to try to find him. From the cold north, they sail south into the heat and the unfamiliar customs and laws in the Moorish lands of al-Andalus. Searching for Beorhtwulf leads Eadwulf and his companions into danger.

In Wessex, following the death of King Aethelred, his brother twenty-one-year-old Alfred has succeeded to the throne. The witan has agreed to Alfred’s succession, but he needs to prove himself. A task made much more difficult by the fact that the Viking Danes are intent on subjugating the kingdom. Alfred has other challenges as well: the Danes are not his only enemies.

Ms Thom brings 9th century Anglo-Saxon England to life: the battles for dominance within (and between) the kingdoms, the ongoing battles against the Danes, Alfred’s realization that a new strategy is required if he is to prevail. There’s plenty of action in this novel, both in al-Andalus as Eadwulf searches for his father, as well as in England. Reading this novel, it is easy to understand why Alfred became known as Alfred the Great: one of the great strategic planners.

This is the third book in what Ms Thom originally intended as a trilogy. I was delighted to read that the trilogy is now a series: a fourth book is underway. Why? Because the stories of Alfred and Eadwulf are not yet complete. Alfred is still fighting the Danes, Eadwulf could be a valuable ally. I may know a little about the history of this period, but Ms Thom brings it to life in a way in which historical facts and figures cannot. I will now (eagerly, but patiently) await the fourth instalment.