This period of history fascinated me when I studied it at school a very long time ago. I may have to get a copy of this book!

The Naval Encounter That Saved Greece – and Western Civilization

Just before dawn on 25 September 480 BC, a Persian armada sailed out of the harbour at Phaleron, just along the coast from Athens. The ships took up position at the entrance to some narrow straits between the Greek mainland and an island called Salamis, where the Greeks had taken refuge. Their fragile alliance, so the Persians had been told, was on the brink of collapse. All they needed was to provoke panic: the Greeks would crumble. And… well, it didn’t quite happen as planned. What unfolded over the next twelve hours was one of the greatest sea-battles of antiquity, and Barry Strauss’s book brings it to pulsing, vivid life. This isn’t a story of nautical jargon and dry-as-dust tactics: it’s swashbuckling of the first order, set against a mighty clash of civilisations, and populated by a cast of…

In 1560 Jean de Coras, judge of the Parlement of Toulouse, found himself faced with an extraordinary case which had come up on appeal from the court at Rieux. A woman, Bertrande de Rols, claimed that the man with whom she had lived for four years was not, in fact her husband Martin Guerre, but an impostor. The husband himself denied the charges and claimed that his wife was being unwillingly coerced by his avaricious uncle, who hoped to get his hands on the family inheritance. This alone would have offered de Coras an intriguing case, but the complex tale of Martin Guerre presently developed an unexpected twist that elevated it into one of the most fascinating courtroom dramas in history. Natalie Zemon Davis’s reconstruction is a classic of modern historical writing, offering an irresistible glimpse of the social and sexual mores of the Renaissance.

Plenty of cloud this morning, after yesterday’s storm.  More rain is forecast for today, and I was happy it held off long enough for me to get in a decent walk.

The cows seem to be enjoying the green grass, and it’s nice to see so much water in the creek this late into spring.

The only aspect I don’t enjoy is the abundance of flies. 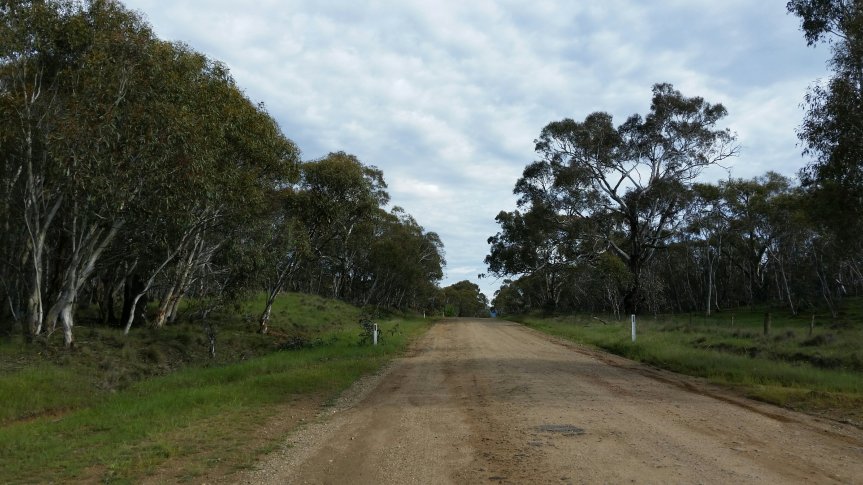 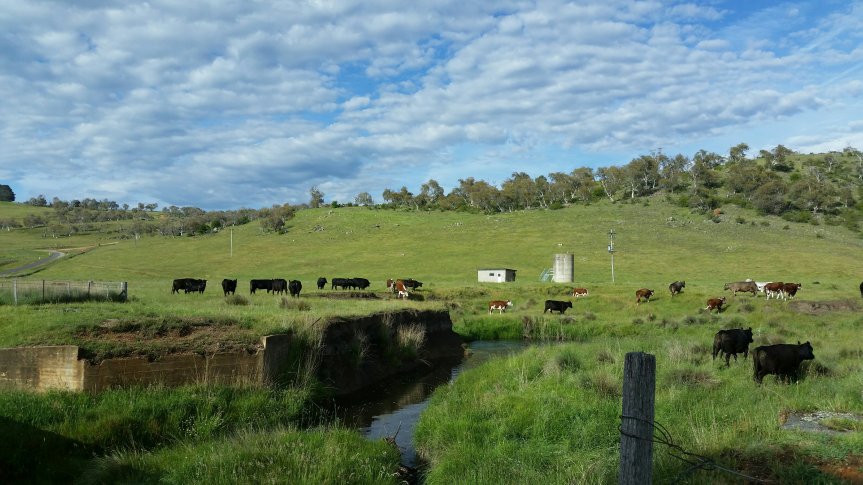 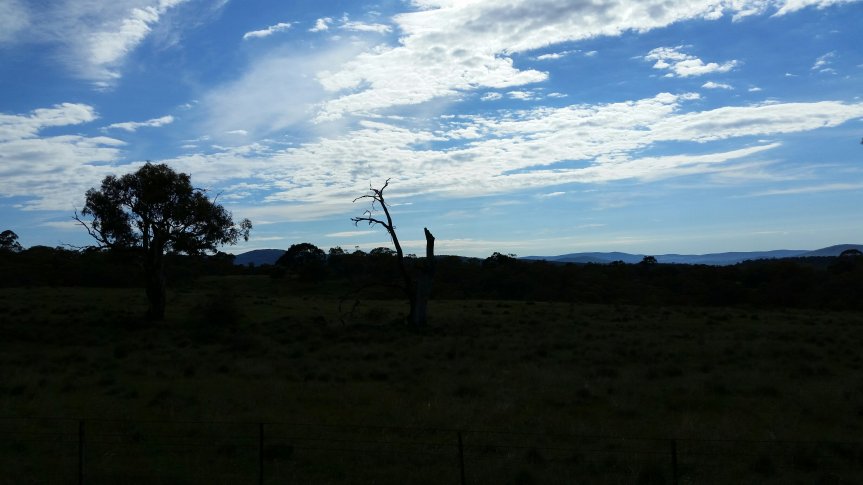 A shorter walk this morning.  I started late and the flies and the humidity helped me to decide that 7.5 kilometres was long enough.  But what a beautiful day it is for the Adaminaby Races!

Everything looks so green here at the moment. 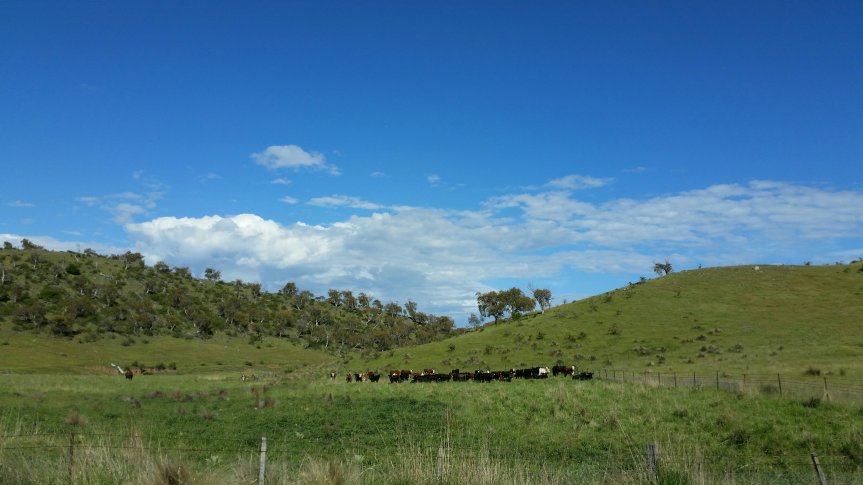 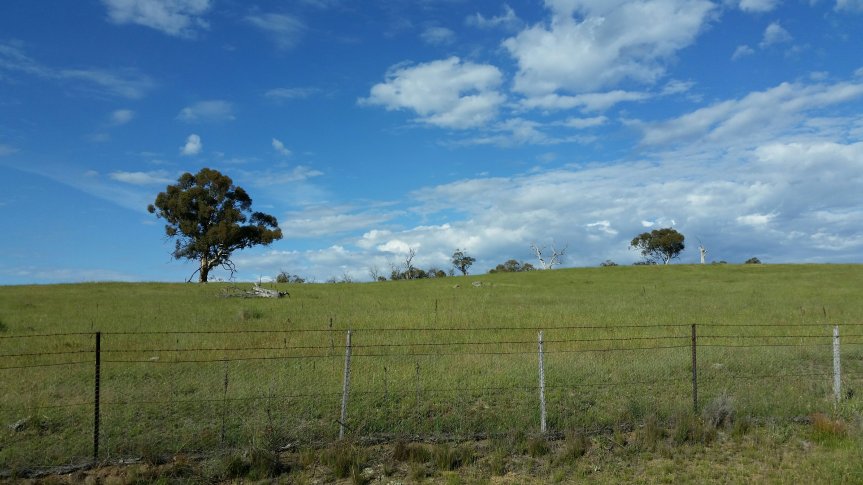 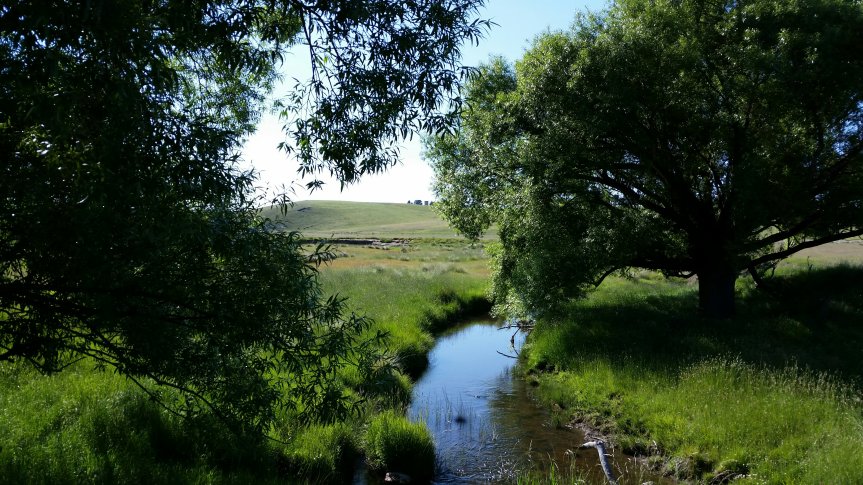 Some days are perfect for walking.  Possible storms are forecast for later in the day, but the morning has been lovely.

In the first photograph, there are some light clouds visible through the trees.  In the second photograph, just clear blue sky.  The third photograph (taken first, before 7 am) has quite a bit of cloud to the east. 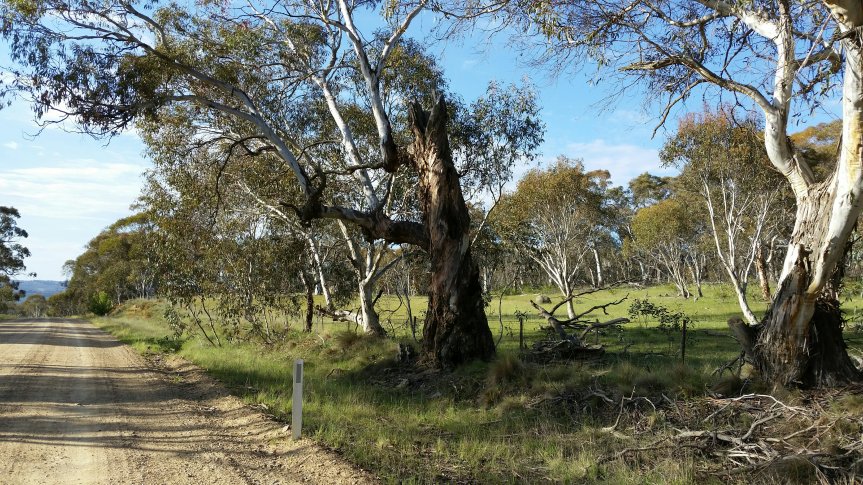 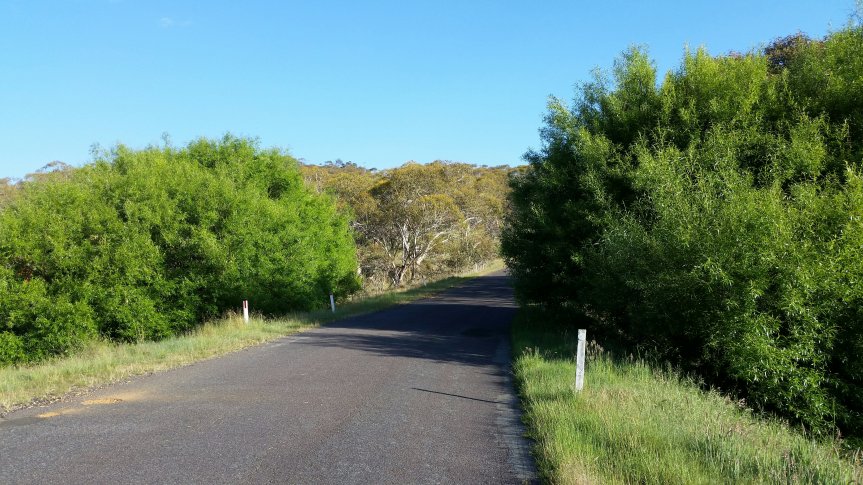 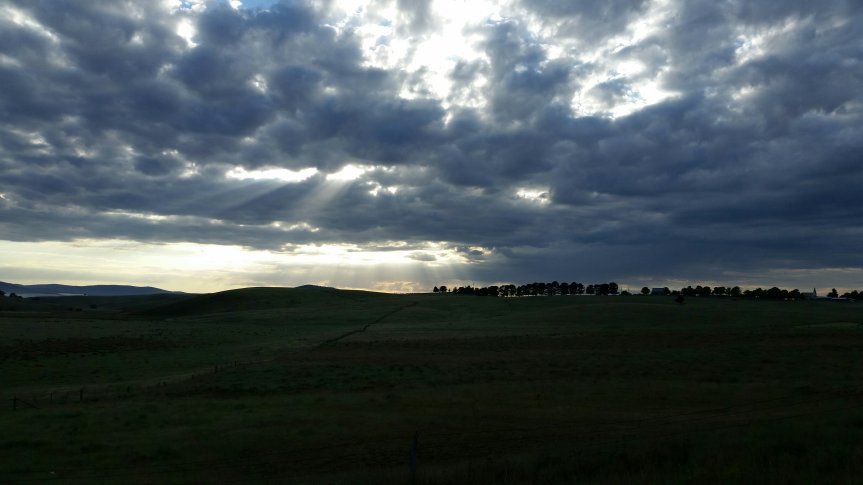 I was fortunate to get in one of my favourite Belconnen walks in before we left Canberra for Adaminaby.  A beautiful morning and then, mid-afternoon, just as we set off it rained.

Walks around Lake Ginninderra are never boring.  There’s always something to see, and someone to say hello to. 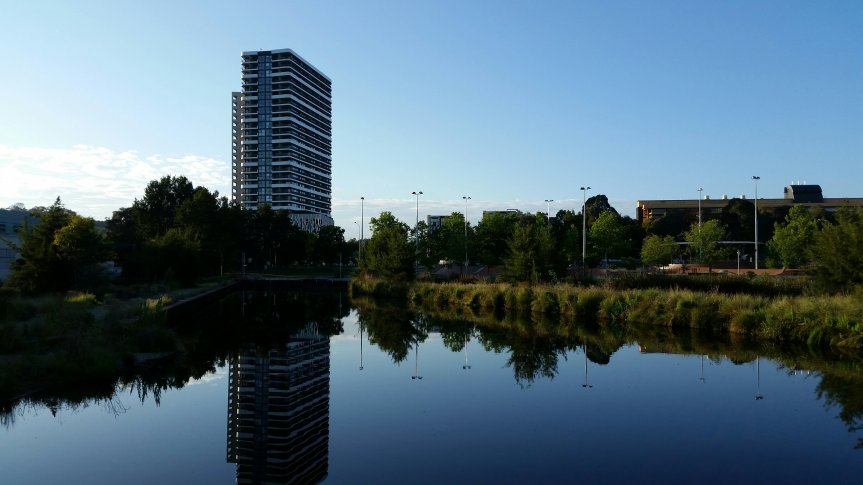 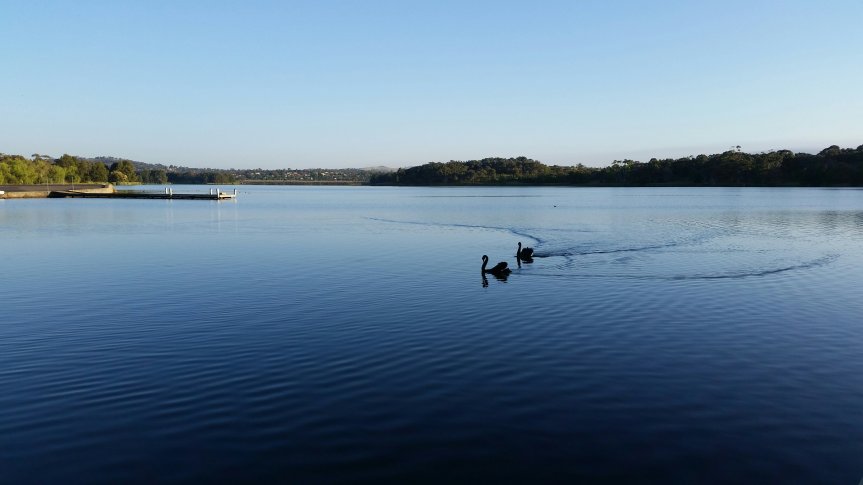 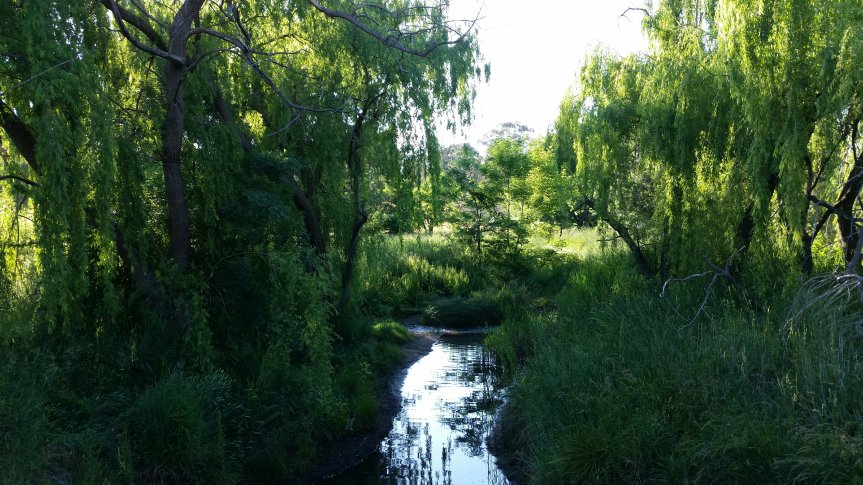 I don’t read a lot of fiction for younger children these days, but every so often I am tempted.  And I’m especially tempted when book is written by an Australian woman :-).  So, now for something completely different:

Megan and Marcus Morgan, aged 8 and 9, are no ordinary school children who enjoy time at the beach.  No, Megan and Marcus are secret agents working for ‘The Environmental Protection of World Beaches’ or ‘EP’.  They are the latest of generations of Morgan children to serve EP.  The family has a beach hut, known as Parry, which is filled with amazing gadgetry and doubles as a very fast rocket ship.  So, when Megan and Marcus receive a message to travel to Australia to save Whitehaven Beach, it takes them only five minutes to travel to Whitehaven Beach from Bexhill-on-Sea in the UK.

When they arrive, they see a massive crocodile which has been swallowing the famous soft white sand on Whitehaven Beach.  But their investigations lead them into danger.  Can Megan and Marcus recover the sand?  What is the story behind the crocodile?  And why is Whitehaven Beach so special? Will it be lost forever?

In this fast-moving children’s adventure, Ms Maisano has combined information about Whitehaven Beach, an engaging pair of heroes, appropriately dastardly villains and all the whizzbang gadgets that heroes need when trying to save the environment.  The story unfolds over nineteen chapters: the sort of story children will enjoy hearing, and adults will enjoy reading to them.  A story for children about children: perfect.  Me, I‘d like to visit Whitehaven Beach one day and  I’m looking for children to read the story to.

This is the first in a series of books (The Paradise Beach Mysteries) by Ms Maisano.  Three have already been published, and a fourth is expected next year.

And here, courtesy of Wikipedia, is some more information about Whitehaven Beach.

For those who like epic fantasy, this is the fifth book in Peter V Brett’s Demon Cycle.  I believe it is the final book in this series.  I started reading this series in 2008, and have waited (with varying degrees of patience) for each instalment.

‘There will be swarm.’

The final war between humankind and demonkind is upon us. It has been inevitable since ‘The Desert Spear’ (Book 2), and while ‘The Daylight War’ (Book 3) and ‘The Skull Throne’ (Book 4) sometimes seemed to be taking a particularly circuitous route to inevitability, ‘The Core’ (Book 5) provides a near perfect finale.

I first read ‘The Painted Man’ (aka ‘The Warded Man’) (Book 1) in 2008 and have read each of the other novels as they’ve been published. Originally, I was expecting a trilogy but was happy to learn that there would be more.

But what is it about the Demon Cycle series that appeals? In this world, demons have ruled the night for centuries. Those humans that remain, scattered across the world, depend on fragments of magic to protect them. Those fragments – magic symbols tattooed onto the body of Arlen Bales (known as the Warded Man), and on the weapons of Ahmann Jardir (known as the Deliverer) provide the men with the means to fight back. But they need to work together. And, as the middle three books in this series show, there’s betrayal and distrust to be overcome. Can they win Sharak Ka (the final war against demonkind)?

‘The Core’s about to rise up again, and you need to be ready to fight, not just for Hollow County, but for the entire human race.’

In the Core, the Queen is breeding. A swarm is about to happen. Arlen and Jardir have a plan. A desperate plan which involves them travelling into the Core to try to stop the Swarm.
Much of the action takes place outside the Core. Leesha, Inevera, Ragen and Elissa need to rally the people of the Free Cities, as the demons become stronger and the attacks become more frequent.

‘Sing as if the world depends on it, for tonight it surely does!’

Tension builds as the action shifts between different key characters: can the Swarm be prevented, who will survive? There are no loose ends left at the end of this novel and while I could wish for (some) different outcomes, that might have been unrealistic of me. Especially in a fantasy novel 😉.

It is important to read the books of this series in order. While it might be possible to follow the story, the character development across the series is important, as is understanding the world Mr Brett has created. There’s plenty of tension in this final instalment, and lots of action with some epic and bloodthirsty battles.

It’s a very personal activity, reading.  Even when we participate in reading groups reading the same book at the same time, every reader will have an individual reaction.  Some will love a book, others will loathe it, most will have a reaction somewhere in between.

But I’ve been thinking  recently about the books I choose to read and review.  I rarely read a book I don’t like and this is because I have some sense of what I will enjoy.  After all, I have been reading for well over half a century, and if I don’t have some idea about what I like by now I guess I never will.  My taste has changed over the decades, so occasionally I’ll pick up something outside my usual fare and find a new like or dislike.

I’ve become aware that I avoid stories which focus on the angsty inner lives of middle-aged women.  Dare I admit that I don’t find most of these stories interesting?  Is it because the landscape is too familiar?  I’m not entirely sure.  Stories which focus on a character’s inner life need to appeal to me in some way.  They don’t need to be facing huge dilemmas or challenges but I want something beyond the mundane and description of the every day events.  I want action.  I’m thinking of Yoda:

This is in fiction.  In non-fiction, I’m very interested in motivation, in possible cause and effect.  I love reading non-fiction about scientists.  Marie Curie was one of my earliest heroes, as were Robert Hooke, Prince Henry the Navigator  and Captain James Cook.  I read about them to try to know more about them, their discoveries and their motivation.

What about you?  Are there particular books you avoid?  Are there books you once loved and now loathe, or vice versa?  And, if you like reading stories about middle-aged women, what appeals to you, and why?  After all, my taste may change again as I edge ever closer to old age …

‘Overhead the stars wheeled and curled.’

There’s been a second failed independence referendum in Scotland. As a consequence, Scotland is in turmoil and has split into a number of autonomous city states. In Glasgow, John Fallon is a disillusioned journalist working for a failing newspaper. His son Roland, participating in a protest, has gone missing after the peaceful protest turned violent. Fallon is worried.

In another world, a boy awakes in the afterlife. He’s accompanied by his spirit guide, his beloved childhood dog Kim. He asks Kim to call him Tarka. Together, they take a journey, to the planets where the dead go, where the boy hopes to find his long dead mother.

As the boy and his dog move between the planets searching for the boy’s mother, Fallon is searching for his son. Both will discover that life (and death) are more complex than each had thought. And the boy? He learns something which requires him to make a difficult choice. Fallon makes his own discoveries, considers what journalism means, wonders about the future. But most of all, it is his son he is searching for. Or is it?

At times I found it hard to navigate my way through this novel. While I liked the idea of a long-dead pet being a guide in the afterlife, I struggled to shift between the two worlds. When I stopped trying to make sense of it, I found it easier going. By the end, I preferred the afterlife to the awful image of Glasgow. And it isn’t just Glasgow, is it? It could well be the world.

There were elements of this novel I really enjoyed, elements that made me think about the world and my own place in it. About my own beliefs and the changes I’ve seen in the last six decades. There were other elements that made me uneasy. But that is surely the role of dystopian fiction, to present confusion, to make the reader uncomfortable, to wonder about ‘what if’?