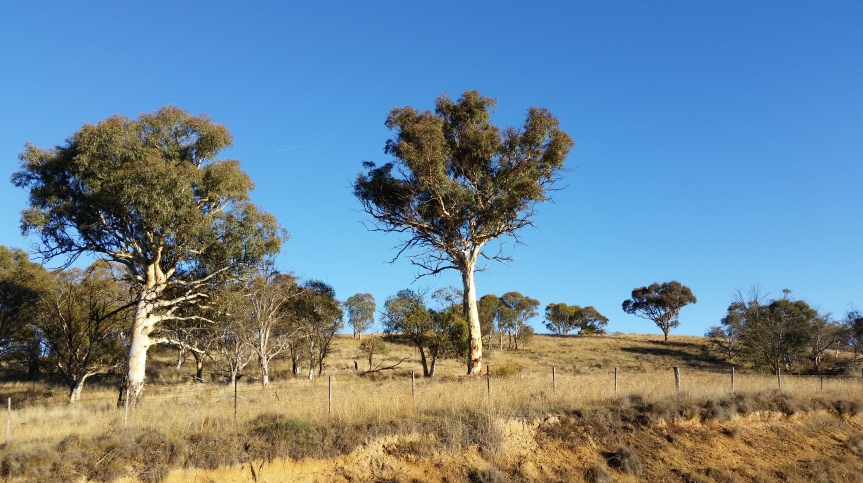 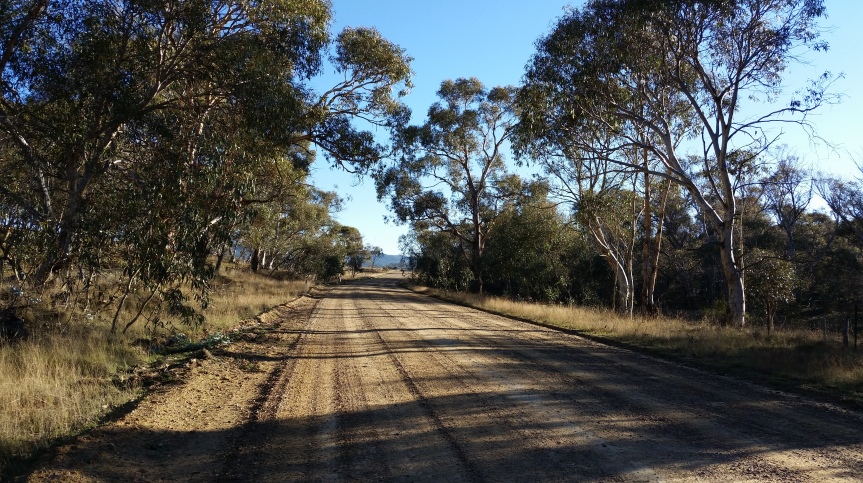 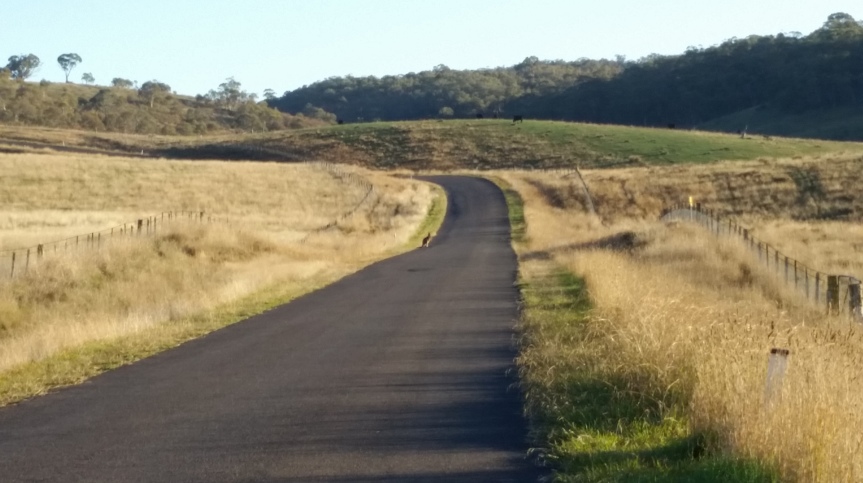 Deep into autumn up here in the Snowy Mountains, and winter will be here shortly.  A beautiful morning for walking.  Clear blue sky to  the north and the west, some cloud to the east.

If you look carefully in the last photo, you might see the kangaroo on the left. The light changes with the seasons, and the same trees and other features can look quite different.   I think that the light is softer at this time of the year, and there’s a tinge of gold.

A quick walk in the fog this morning before we left Canberra for Adaminaby.  St Matthews Church looks very different through the fog.  The sun was trying to make its presence felt.  It looks just like a shadowed disc.

Malcolm Turnbull is dropping everything and travelling to America to meet a man that only recently subjected him to a very public humiliation. Although members of the Trump administration have trie…

Source: MARK BEESON. ANZUS: Too obliging for our own good? | John Menadue – Pearls and Irritations

A thoughtful reflection on life, and death.

Dying: A Memoir by Cory Taylor

‘The fact that I was dying now was sad, but not tragic.  I had lived a full life.’

At the age of sixty, Cory Taylor was dying of a melanoma-related brain cancer.  Her cancer could no longer be treated, and death was inevitable.  And so, she wrote this book.  I imagine that every person who reads it comes away with something slightly different.  For me, it’s Cory Taylor’s reflections on her life, and her observations about the deaths of her parents.  So many echoes, too, in her thoughts about being able to choose the circumstances of her death.  I’ve lost two friends in as many years, two friends who suffered because preserving life was, apparently, more important than a comfortable death.

The book is full of clear and careful reflection.  At one stage, writing about the unexpected death of a friend who was helping her, Cory writes:

‘A sudden death cuts out all of the ghastly preliminaries, but I imagine it leaves behind a terrible regret for all the things left permanently unspoken.  A slow death, like mine, has that one advantage. You have a lot of time to talk, to tell people how you feel, to try to make sense of the whole thing, of the life that is coming to a close, both for yourself and those who remain.’

She writes of acceptance, of her ambition to be a writer.  Of having no regrets, and of worrying about death:

‘It is by far the hardest thing I’ve ever done, and I will be glad when it’s over.’

‘My doctor has promised to honour my wishes, but I can’t help worrying.  I haven’t died before, so I sometimes get a bad case of beginner’s nerves, but they soon pass.’

It’s a beautifully written book.  Dying is a personal journey which, at some stage, each of us will make.  It’s a book on a topic we need to discuss more openly: death is inevitable, but the circumstances of death vary.  People should not suffer when suffering can be avoided.

Right at the end of the book, Cory Taylor writes:

‘I’ve come to the edge of words now, to the place where they falter and strain in the face of dying’s terrifying finality.’

I can only hope that Cory Taylor did not suffer.

Cory Taylor died on 5 July 2016, a couple of months after this book was published.  She was aged 61.  I had previously read ‘My Beautiful Enemy’, and I’ve added ‘Me and Mr Booker’ to my reading list.

This book found its way onto my reading list in one of those serendipitous events that is (obviously) just meant to happen.  It caught my attention because it is (mostly) set in 19th century Van Diemen’s Land (now Tasmania). It held my attention because of the beautifully crafted imagined life of Sophia Degraves.

The Shape of Water by Anne Blythe-Cooper

‘I wake and I know the hour is early.’

In this novel, Ms Blythe-Cooper sets out to imagine the life of Sophia Degraves, the wife of Peter Degraves, co-founder of the Cascade Brewery in Hobart and designer of Hobart’s Theatre Royal.  While a lot is known about Peter Degraves, his various business interests and runs-in with the law, very little is known about his wife.

But Sophia Degraves, who died on 30 May 1842, is documented only in child bearing and death.  What would her life have been like?  How did she deal with frequent child-bearing, with the death of some of her children?  How did she survive during Peter Degraves’s periods of imprisonment?

Ms Blythe-Cooper draws Sophia from the shadows.  Her research may not have provided her with historical detail about Sophia Degraves, but it has certainly provided her with a wealth of information about the period in which she lived.  And so, for me, an entirely plausible Sophia comes to life, especially in Hobarton from 1824 until her death.

In the earlier part of the novel, Ms Blythe-Cooper focusses on Sophia’s early life in London, on her marriage to Peter Degraves, on his optimism and opportunism.  While I was less interested in this part of the novel, it’s important to the depiction of Sophia once the family travels to Van Diemen’s Land.  She has chosen to stay with her husband (although, in reality she probably had no other choice) but it’s the imagined detail of how she lived her life that has me entranced.

As her daughter Deborah says to Peter after Sophia’s death:

‘Our mother was invisible to you unless she was useful.’

Such a sad comment.  And yet, it feels accurate.

When I finished this novel, I felt that I had some sense of Sophia Degraves.  It has me wondering about the other women who dwell in the shadows of history, as though they are simply some invisible adjunct to a better-known husband. The shape of water indeed.

I recommend this novel to anyone interested in well-written historical fiction crafted around life in the first half of the 19th century in Van Diemen’s Land.

Australians have commemorated Anzac Day on 25 April for more than a century, but the ceremonies and their meanings have changed significantly since 1915.

Source: The evolution of Anzac Day from 1915 until today – Australian Geographic

‘He’s my friend.  And friends help each other in times of need.’

Meet Darren Mangan, he’s a cab driver in Sydney.  Darren spends most of his time on the right side of the law, but he’s been known to cross the line, especially if a mate needs a hand.  But Darren’s life changes completely after two chance meetings with a young man named Martin.  The first time, Martin attacked a friend.  The second time, it’s Martin’s cruelty towards his dog that has Darren take note.

Because of a friend, Darren becomes caught up in a search for a stolen gun, a .38 Smith & Wesson.  And the search for this gun leads Darren into some fairly dark places.  Trying to find the gun and trying to track down Martin become Darren’s objectives.  Darren’s journey takes him from Sydney to the News South Wales south coast, and then to Townsville.

In the meantime, Martin is on his own mission, and you just know that this isn’t going to end well.  Will Darren prevail, and at what cost?

‘Taking responsibility for your own stupidity is something I grew up with.  The old man paid the price for his habit.’

Delivered in short, sharp chapters, this is a story that held my attention from the first page to the last.  Darren’s motivation is easy to understand, even if some of his choices are questionable.  And, in Martin, I’ve met a character with absolutely no identifiable redeeming features.

Did I enjoy this novel?  Yes.  It’s black, it’s bleak and it moves quickly.  This is Mr Hollenkamp’s first published novel, and is to be the first of a series featuring Darren Mangan.  I’ll certainly be in line to read the next one.

Note: I was offered, and accepted, a free copy of this novel for review purposes.

I’m so very, very disappointed in this government.

~~~~~~~~
And this is the big glitch in last week’s announcements – there was a lot of sound and fury, but it was hard to see just what, if anything, will really change – except, perhaps, the squalid dynamic…

This is an important book.  It is an uncomfortable read for those of us who don’t want to think too closely about the impact of Australia’s mandatory detention policy.  Two of the five editors of this book are Australian women, and I’ve included this book as part of my AWW 2017 challenge in the hope that it might encourage more people to read the book.

‘The sky is like a friend for a prisoner, because around you everything is metal fences, but the sky, they cannot take the sky.’

That’s where a book like this becomes important.  As Christos Tsiolkas writes in the foreword:

‘We read for pleasure and we read for knowledge.  And there are some books we read because we must, for in not reading them we are in danger of not understanding our world and our own place in the world.’

‘Do we have time?  I mean, because when I keep talking I’m not feeling the time.  This is a true story.  Truth takes time.’

It would be difficult to read these accounts and not be moved.   The individuals have different circumstances, different experiences.  But each of them has struggled.  Each of them was fleeing from a dangerous, intolerable or uncertain situation, hoping for a better future.

This book raises so many questions for me.  How should the Australian Government manage mandatory detention?  For how long can indefinite detention be ‘justified’? Given that both major political parties are in favour of mandatory detention, what hope is there for change?  And do the majority of Australians want to see the policy changed?

Read this book, these accounts from more than twenty people from countries including Afghanistan, Iran, Iraq, Somalia and Sri Lanka.  And think about what indefinite mandatory detention says about us.

‘We stayed, just thinking, and nothing else.  We are not dreaming.  We just came to the realisation that we had lost our future.’

Anzac Day  is about much more than the anniversary of the landing on Gallipoli in 1915. It is the day on which we remember the Australians and New Zealanders who served and died in war and on operational service.

Here are observations of Anzac Day 2017 from the  Australian War Memorial.

During the World War One, my grandfather and his brother shipped to Gallipoli and then saw service in France.  My great uncle died as a consequence of his service.  On the other side of my family, four of my grandfather’s cousins served in World War One.  Two were killed in action in France.

In World War Two, cousins saw service, as did members of my husband’s family.

We are proud of each of them.